As the weather cools down this fall, entertainment at Walt Disney World Resort heats up with new experiences offering guests a chance to strike up fun at a new bowling and entertainment complex, indulge their Disney fantasies in the New Fantasyland, immerse themselves in the world of Jack Sparrow, become automotive designers, see zebras up close on safari, and much more.
Here’s a look at what’s in store…
Preview date of Nov. 19 has been set for the next phases of the New Fantasyland leading to the Grand Opening on Dec. 6. Adding to the big top fun of Storybook Circus, already in place, guests will delight in everything new coming on line for fall and winter:

The age-old image of bowling is about to change with the opening of Splitsville, America’s Bowling Alley, at Downtown Disney West Side this fall. 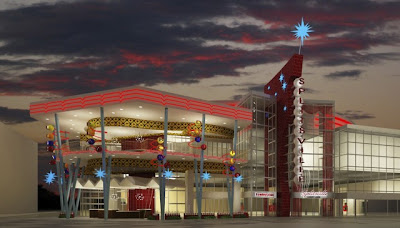 Splitsville’s 50,000 square feet, two-story location will be unlike traditional bowling alleys — with 30 lanes separated into several clusters to create a one-of-a-kind perspective immersed in hip and retro elements. The Downtown Disney location also will boast billiard tables, live entertainment, a dramatic balcony and ample outdoor seating.
Placing a whole new spin on the bowling experience with its emphasis on unique design, Splitsville will greet guests with upscale sushi bars, plush booths and dynamic decor overlooking the bowling lanes. Between strikes and spares, guests can feast on menu items including hand-tossed pizza, fresh-rolled sushi, grilled mahi-mahi with “Voodoo” shrimp and hand-cut filets alongside alley-classics such as cheeseburgers and crinkle-cut fries served right at the lane. For more information, visit www.splitsvillelanes.com.

Enjoy ‘best’ eats and sips from around the world 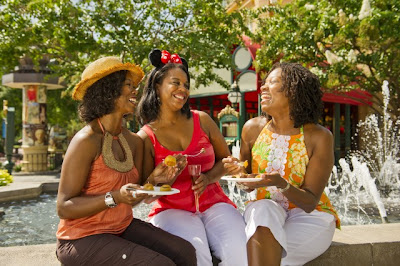 New vegan and fresh-from-Florida dishes will debut along with international bites and sips at the 17th annual Epcot International Food & Wine Festival Sept. 28-Nov. 12, 2012. The 46-day culinary event — named one of the “Best Food and Wine Festivals” on the Travel Channel web site – adds an extra day of festival fun this year. Festival goers are treated to top music acts during daily Eat to the Beat! pop concerts, where four new Eat to the Beat! acts -Smash Mouth, “The Voice” winner Javier Colon, Blues Traveler and Dennis DeYoung, original member of STYX — and 14 returning bands will take their turn on the America Gardens Theatre stage.
Authentic Taste seminars, HGTV home-entertaining presentations and most event experiences are included with regular Epcot admission. To book special festival programs like Mixology Seminars, Culinary Demonstrations and the Party for the Senses grand tasting events, guests can call 407/WDW-FEST (939-3378). Information for select events and programs will be updated periodically at www.disneyworld.com/foodandwine.

A re-imagined, design-centric Test Track Presented by Chevrolet will debut in fall with a sleek new “Chevrolet Design Center.” Amid upbeat music, engaging media, dramatic lighting and a collection of Chevrolet concept cars and model vehicles, guests themselves will become automotive designers and create their own custom concept vehicles.
The adventure will then shift into high gear as guests buckle into their 6-person “SimCar” ride vehicle and put their design through its paces on the exhilarating hills, switchbacks and straight-aways of the Test Track circuit. Their performance testing complete, guests will move into a post-show area filled with special effects and be scored on how well their custom concept vehicle did.
The Test Track refurbishment is part of a new multi-year alliance with General Motors. As Chevrolet marks its 100th anniversary, the new alliance agreement enables General Motors to tell its story in new and exciting ways to millions of guests from around the world and continue as the official vehicle sponsor of Walt Disney World Resort.

“Phineas and Ferb & YOU: A Brand New Reality” Debuts at Downtown Disney

Starting this fall, Walt Disney World Resort guests will become the stars of “Phineas and Ferb & YOU: A Brand New Reality.” The virtual experience will allow guests to play with animated characters from Disney’s Emmy Award-winning animated series “Phineas and Ferb.” The fun happens at Downtown Disney West Side, next to Bongos Cuban Café Sept.1 – Dec. 1, from 2-9:30 p.m. daily.
How it works: As many as three guests are invited to stand inside the virtual experience set, and out of 20 randomly pre-determined animation segments, Phineas and Ferb, Agent P or even Dr. Doofenshmirtz will magically appear to play and dance alongside them. It all happens in a virtual (on-screen) 30-second experience. But the fun doesn’t end there! Guests may visit a special website to download and share with family and friends a complimentary souvenir photo of their starring role. To complement this limited time engagement, special Phineas and Ferb merchandise will be available at a nearby merchandise stand.

Swashbucklin’ this Fall: The Legend of Captain Jack Sparrow

The Legend of Captain Jack Sparrow debuts this fall at Disney’s Hollywood Studios, giving Walt Disney World Resort guests a chance to become immersed in the world of the four “Pirates of the Caribbean” films.
Aspiring pirates will experience the story of Jack Sparrow like never before to discover if they have what it takes to join Captain Jack’s crew.
The attraction will be included with theme park admission and will be located in Soundstage 4, former space of Journey Into Narnia: Prince Caspian.

After summer sailings out of NewYork City to Canada and the Bahamas, the Disney Magic will call the Port of Galveston home for the first time during fall and winter 2012 for a series of seven-night cruises to the Western Caribbean. The Disney Wonder will return to the Port of Los Angeles to host four Pixar-sinspired seven-night California Coastal cruises in September and October, a special 14-night voyage to Hawaii in October and seven-night Mexican Riviera cruises throughout fall and winter.

Kilimanjaro Safaris: From A to Zebra

Zebra at Disney’s Animal Kingdom welcome guests on Kilimanjaro Safaris to their new home in fall 2012. A reconstructed savannah space featuring a new watering hole for live animals will offer an additional viewing opportunity at the end of guests’ expedition through Africa.

Beginning in November, Walt Disney World Resort guests will experience a new nighttime projection show on Cinderella Castle in Magic Kingdom Park. ”Celebrate the Magic” will incorporate favorite elements from the previous show, “The Magic, The Memories and You!,” with all-new music, storytelling and special effects. According to show director Katy Harris, “Celebrate the Magic” will be a journey to the heart of the most beloved Disney stories and characters.

A family-friendly fright-fest in Magic Kingdom featuring a children’s parade, trick-or-treating throughout the park, face painting, and more, Mickey’s Not-So-Scary Halloween Party is a Halloween-themed special event held on 23 select evenings Sept. 11-Nov. 2. Purchase of an additional admission ticket is required to attend. More information: Disneyworld.com/Halloween
RunDisney double-dares guests to brave dark and ghostly streets haunted by Disney villains in The Twilight Zone Tower of Terror 10-Miler Weekend Sept. 28-29. The newly created 10-mile race takes place in and around Disney’s Hollywood Studios with thrilling rides operating late into the night. The weekend includes the Disney Villains Hollywood Bash, kids’ races and a family fun run 5K at ESPN Wide World of Sports Complex. For more information, visit runDisney.com.
The PGA TOUR returns to Walt Disney World Resort for the 42nd Children’s Miracle Network Hospitals Classic, Nov. 8-11. The Fall Series event, held annually at the Palm and Magnolia Golf Courses, features some of the world’s top golfers playing in one of the resort’s longest-running traditions.
A popular destination for golfers and their families, the Classic serves as the season finale for the PGA TOUR, and the final opportunity for golfers on the threshold to play their way into the Top 125 on the money list. Additionally, the pro-am format has recently been headlined by popular names such as Johnny Damon, Ray Allen, Doc Rivers and Jerome Bettis. For more information, visit: http://classic.childrensmiraclenetworkhospitals.org
With a start under the stars, the Disney Wine and Dine Half Marathontakes runners through the theme parks with world-class Disney entertainment along the way to help the miles fly by. After finishing, runners and their guests can celebrate their accomplishment at an exclusive after-hours party inside the Epcot International Food & Wine Festival. The weekend, Nov. 9-10, also includes kids’ races, a family fun run 5K and a health and fitness expo. For more information, visit runDisney.com.
Downtown Disney invites guests to the 37th Festival of the Masters presented by Michaels Nov. 9-11. This outdoor fine arts show features more than 150 juried Fine Artists and over 40 Emerging Masters, offering one-of-a-kind selections in jewelry, paintings, clay, glass and eight additional categories. Plus, live entertainment, interactive activities for kids and families and unique food offerings. Additional information can be found at disneyworld.com/downtowndisney
More information about Walt Disney World Resort is available at disneyworld.com

Posted by mikeandthemouse at 4:48 PM