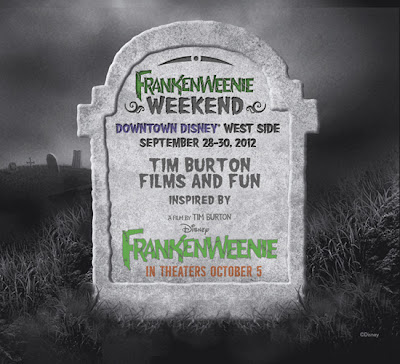 In celebration of Disney’s new stop-motion animated movie “Frankenweenie,” directed by acclaimed filmmaker Tim Burton and opening October 5 in 3D, Walt Disney World Resort is hosting a variety of engaging experiences inspired by the new movie, “The Nightmare Before Christmas” and “Alice in Wonderland.” The fun takes place at Downtown Disney West Side Sept. 28 – 30, 2012.
Here’s a look at what’s in store for guests:
Special 3D screenings of “The Nightmare Before Christmas” and “Alice in Wonderland,” featuring a 3D extended preview of “Frankenweenie,” which debuts Oct. 5. Tickets may be purchased for $6. The fun takes place at AMC Downtown Disney 24. Show times:
New Holland Pet Cemetery picture spot presented by HGTV will place guests in one of the key locations of “Frankenweenie” among tombstones of beloved turtles, rabbits, cats and of course, dogs. Located between AMC Downtown Disney 24 and Something Silver boutique, available 6-11 p.m.
The first-ever meet and greet with Jack and Sally from “The Nightmare Before Christmas” at Walt Disney World Resort. Located between AMC Downtown Disney 24 and Harley Davidson, available 6-11 p.m.
Special merchandise inspired by “Frankenweenie” and “The Nightmare Before Christmas” will be available for purchase at D-Street boutique and mobile carts throughout Downtown Disney West Side. Special treats, such as Franken Fusion Lemonade and Frankenweenie hotdogs will be available near the New Holland Pet Cemetery picture spot.
Until capacity is reached, you can sign up for a free screening by clicking here. Make sure to tell them that you heard about it at MikeandTheMouse!

About “Frankenweenie”: From creative genius Tim Burton (“Alice in Wonderland,” “The Nightmare Before Christmas”) comes “Frankenweenie,” a heartwarming tale about a boy and his dog. After unexpectedly losing his beloved dog Sparky, young Victor harnesses the power of science to bring his best friend back to life—with just a few minor adjustments. He tries to hide his home-sewn creation, but when Sparky gets out, Victor’s fellow students, teachers and the entire town all learn that getting a new “leash on life” can be monstrous.
Posted by mikeandthemouse at 10:14 AM