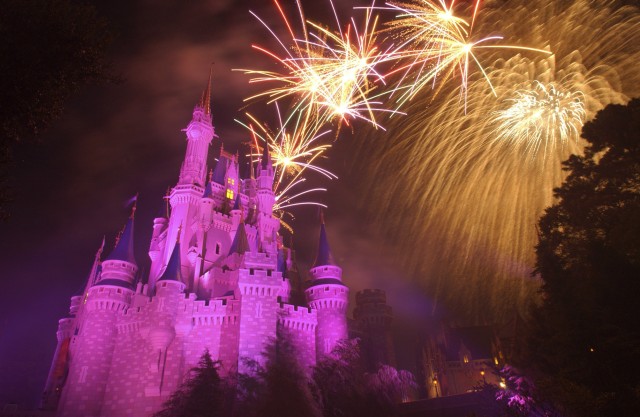 Big Gulp . . . It would take more than 20 million 12-ounce cans of Coca-Cola to fill one of the humongous Coke cups at Home Run Hotel in Disney’s All-Star Sports Resort.
Tennis Anyone? . . . It would take nearly 9.5 million tennis balls to fill one of the tennis ball cans at Center Court Hotel in Disney’s All-Star Sports Resort. That’s enough to stretch from Walt Disney World Resort to Key West.
World’s Largest . . . Stormalong Bay, Disney’s Beach Club Resort swimming area, holds 750,000 gallons of water, making it the largest sand-bottom pool in the world.
Five-Legged Goat . . . The mosaic mural in the fourth-floor lobby of Disney’s Contemporary Resort was created in 1971 with 1,800 one-square-foot tiles and took 18 months to construct. Look closely: there’s a five-legged goat facing the monorail track.
Music to Your Eyes . . . The musical notes across the registration desk at Disney’s Port Orleans Resort-French Quarter play out the first verse of “When the Saints Go Marching In.”
Big Wheel Fit For a Big Kid . . . The giant Big Wheel in the 1970s courtyard of Disney’s Pop Century Resort can “accommodate” a child rider who weighs up to 877 pounds (according to the “recommended child weight” sticker affixed to the gigantic toy).
Room Roulette . . . If you wanted to stay in all the guestrooms in all of the hotels and resorts currently open on Walt Disney World property (at a rate of one per night), it would take decades.
HORTICULTURE
Bloomin’ Beauty . . . Nearly 12 percent of Walt Disney World property — an area equivalent to nearly 3,000 football fields — is devoted to gardens and maintained landscapes. That’s 4,000 acres worth of beauty.
Well Grounded . . . Each year a horticulture staff plants 3 million bedding plants and annuals, and maintains millions of other plants including more than 4 million shrubs, 13,000 roses and more than 200 topiary.
A “Family” Tree . . . The “Liberty Oak,” which is the focal point of the Liberty Square area in Magic Kingdom, is the proud parent of more than 500 young trees. They all started out as acorns harvested from the majestic oak.
Pack the Trunk . . . Earth Day 1991 signaled a “moving” experience for yet another impressive oak — a 55-foot-tall tree weighing in at nearly 85 tons. The live oak was moved 12 miles across Walt Disney World property to where it serves as a centerpiece for the Ol’ Man Island recreation area at Disney’s Port Orleans Resort-Riverside.
Mow Miles Per Year . . . 450,000 mowing miles, to be exact — that’s what it takes to maintain 2,000 acres of turf. For the record, those mower miles are the equivalent of 18 trips around Earth at the equator.

Posted by mikeandthemouse at 7:12 PM