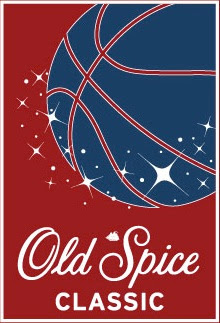 T­he bracket for the 2012 Old Spice Classic – held Thanksgiving weekend, Thursday, Friday and Sunday, Nov. 22, 23 & 25, at HP Field House at ESPN Wide World of Sports Complex near Orlando, Fla. – has been confirmed for the eight teams competing: Clemson, Davidson, Gonzaga, Marist, Oklahoma, UTEP, Vanderbilt and West Virginia.
ESPN2 will carry seven of the tournament games, including all four first-round games. ESPNU will air three and ESPN and ESPN3 will each have one game. The Championship Game will air Sunday, Nov. 25, at 7 p.m. ET on ESPN2. The entire tournament will be available through WatchESPN, accessible online at WatchESPN.com and through smartphones and tablets via the WatchESPN app to fans who receive their video subscription from an affiliated provider. The on-site games from the Old Spice Classic will air on ESPN3D.
Tournament highlights:
The 2012 Old Spice Classic, a bracket-format tournament, will feature 12 games over the three days. Each team will compete in one game per day, advancing through a bracket-tournament format. The two teams that remain undefeated throughout will face off in a championship match Sunday, Nov. 25.
The family-friendly tournament is a weekend-long affair at the Walt Disney World Resort where participating teams practice, play and enjoy the Walt Disney World Resort Theme Parks. Travel packages are available for fans and include resort accommodations at the team hotel, game tickets, theme park tickets and much more. Visit AnthonyTravel.com/OSC or call 888-632-6951 to make your reservation today.
Sponsors include Old Spice, ESPNU and ESPN’s Wide World of Sports. The Metro Atlantic Athletic Conference (MAAC) will serve as the event’s sponsoring conference for the seventh straight year.
Dayton won the 2011 Old Spice Classic title, while Notre Dame captured the 2010 title. Florida State won the 2009 Classic, and additional winners include Gonzaga in 2008, North Carolina State in 2007 and Arkansas in 2006.
The Old Spice Classic is owned and operated by ESPN Regional Television (ERT), a subsidiary of ESPN.
Old Spice Classic (Schedule subject to change)
^ – Non-bracketed game

Posted by mikeandthemouse at 7:59 AM