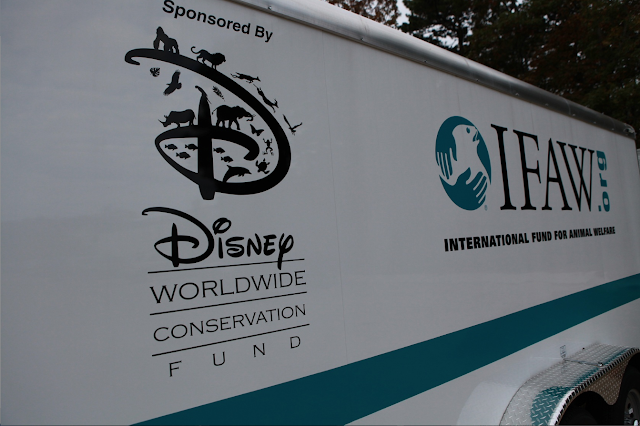 Beyond the theme parks...
The Disney Worldwide Conservation Fund (DWCF) recently provided $250,000 to the International Fund for Animal Welfare (IFAW), whose animal rescue team was among the first to help save hundreds of animals after Hurricane Sandy.
In addition to providing immediate supplies to help equip a disaster response trailer, the DWCF grant will also help IFAW to plan for the future by providing resources for future response efforts, as well as training sessions for disaster preparedness globally.
According to rescue team members, families affected by the storm were concerned about the welfare of the pets they had to leave behind and were relieved to know that organizations like IFAW were working to ensure that their animals would be safe.
Funding for this DWCF grant was provided by Disney Friends for Change, which contributed the proceeds from the iTunes downloads of various songs including “Rise” and “Send it On.” Guests at Disney Parks and Resorts also help support the DWCF through contributions made at various parks and resorts and even while sailing with Disney Cruise Line.   These contributions as well as the proceeds from various programs, tours and merchandise are all directed to the DWCF annual conservation grants program to help engage people and protect wildlife around the world. Disney matches guest contributions and covers all administrative costs.
This year the DWCF celebrated a $20 million milestone of giving through its various programs to support the study of wildlife, the protection of habitats and the development of community conservation and education programs in critical ecosystems around the world.
The DWCF has supported IFAW’s efforts for more than 10 years, including the rescue of 20,000 endangered penguins from an oil spill in South Africa in 2000, and support for the animal victims of Hurricane Katrina, the Asian tsunami and the Haiti earthquake.
Posted by mikeandthemouse at 6:31 AM