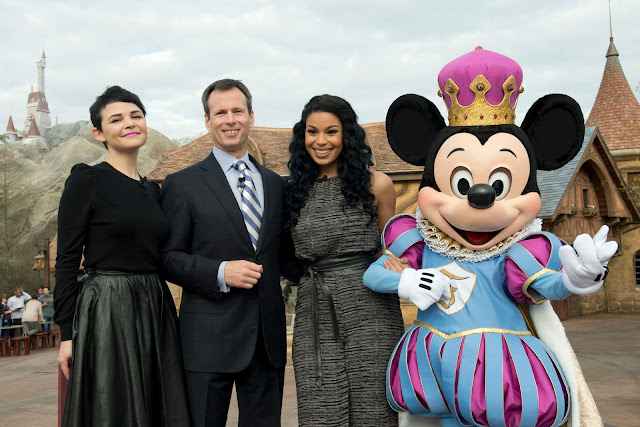 The star of “Once Upon a Time” kicked off the “happily ever after” at the grand opening Thursday of New Fantasyland, the largest expansion in the history of the Magic Kingdom at Walt Disney World Resort.  Ginnifer Goodwin, who plays Snow White on the hit ABC-TV drama, joined pop star Jordin Sparks and Walt Disney Parks and Resorts Chairman Tom Staggs in ceremonies filled with favorite Disney characters, daytime fireworks and timeless melodies from classic Disney films.

“Walt Disney once promised that Disneyland, and by extension all of our parks, would never be complete as long as there is imagination left in the world,” Staggs said. “New Fantasyland is a spectacular addition to the Magic Kingdom that delivers on Walt’s promise. We’re thrilled to take guests beyond the walls of Cinderella Castle to discover new worlds featuring iconic Disney characters and stories in ways that are more imaginative, more interactive and more immersive than ever before.”

New Fantasyland consists of the Enchanted Forest and Storybook Circus areas. Walt Disney Imagineers brought to life beloved Disney stories and magical places, putting guests in the middle of Disney classics and new favorites – and making memories to last a lifetime. Here’s just a sampling of the new enchanted areas now open in New Fantasyland:
There’s even more in store as the expansion of New Fantasyland continues:
Later Thursday, Test Track Presented by Chevrolet was scheduled to rev up its engines in a new re-imagined version of the Epcot attraction that focuses on guests designing their dream wheels, then putting their design to the test. And on Friday, a media preview was scheduled for Splitsville Luxury Lanes at Downtown Disney West Side. The bowling, dining and entertainment complex is slated to open for guests later in December.

All Photos ©Walt Disney Company
Posted by mikeandthemouse at 8:14 PM