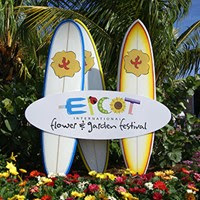 The 2013 Epcot Flower and Garden Festival taking place from March 6 - May 19, 2013 is lining up to be even better than ever. Along with all the topiaries and the Flower Power concert series, new this year will be the introduction of 12 World Showcase promenade marketplace kiosks offering food and drink. Read on for more details from Disney.

•Garden Marketplace culinary creations ranging from smokehouse barbecue and shrimp with grits and Zellwood corn to sweet “frushi” made with fresh fruits and coconut rice. Chefs are perfecting menus for marketplaces that will include Florida Fresh at World Showcase Promenade, Smokehouse Barbecue and Brew at American Adventure courtyard, Primavera Kitchen at Italy showcase, Hanami at Japan showcase and eight others. Around the World Showcase promenade

•Garden Marketplace refreshing libations with a kick like Hot Sun Tomato Wine from Florida Orange Groves Winery and Dole Whip with Spiced Rum, as well as non-alcoholic drinks like Frozen Desert Violet Lemonade and Wild Berry Slush. Beverage specialists will feature brews and beverages at food marketplaces and at Fruits by the Glass and Pineapple Promenade. Around the World Showcase promenade

•A new, circus-like “Land of Oz” play area based on the Disney fantastical film adventure “Oz: The Great and Powerful” to be released March 8, 2013. The interactive children’s play zone will feature play systems adorned with giant flowers and designed to stretch kids’ imaginations and muscles. Midway-style games, red-and-white circus-themed tents and the “Oz Movie Garden” of intriguing plants will capture the spirit of the upcoming film. Also on tap: photo opportunities and the “great and powerful Oz’s” crashed hot-air balloon. Imagination Walkway

Every Friday through Sunday, HGTV design celebrities will host Festival Center seminars. During opening weekend, March 8-10, Chris Lambton of “Going Yard” will appear; other designers scheduled to take the stage include David Bromstad of “Color Splash” and Meg Caswell of “Meg’s Great Rooms.”

In all, more than 100 topiaries, 240 floating mini-gardens, dozens of flower towers and sweeping beds of multi-colored blooms will add floral splendor to the park landscape. Speaking of “flower power,” the Flower Power concert series kicks off March 8-10 with Micky Dolenz (“I’m a Believer”) and continues each weekend with pop favorites including: