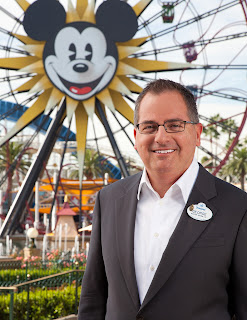 Disney has just announced that George Kalogridis has been named President Walt Disney World Resort. Most recently George has been president of the Disneyland Resort, where he oversaw the massive rebranding of Disney's California Adventure. In his 41 year career at Disney, he has also held positions at Epcot and Disneyland Paris. His new role will begin on February 1, 2013. More organizational changes are expected throughout the Parks and Resort in the coming days.

Here is the full release from Disney.


On January 9, 2013, George A. Kalogridis, a 41-year veteran of Walt Disney Parks and Resorts, was named president of the Walt Disney World Resort in Lake Buena Vista, Fla. George will oversee a workforce of more than 66,000 Cast Members at the world’s premier vacation destination. His appointment will be effective Feb. 1, 2013.

Since 2009, George has served as president of the Disneyland Resort, where he leads more than 25,000 Cast Members at the over 500-acre resort, which comprises the world-famous Disneyland Park, Disney California Adventure Park, the Disneyland Hotel, Disney’s Grand Californian Hotel & Spa, the Paradise Pier Hotel and Downtown Disney.

George began his career at Walt Disney World in 1971 as a busboy at the Contemporary Resort. During his tenure, George has held numerous executive positions, gaining a breadth of experience from all aspects of the operation.

From 2006 until his appointment to Disneyland Resort, George served as chief operating officer for Disneyland Resort Paris and was responsible for leading the daily operations of the Resort’s two theme parks, seven hotels and the Disney Village. During his tenure in Paris, George oversaw the highly successful 15th anniversary celebration of the resort. He also played an instrumental role in reorganizing the Resort’s operations structure to help improve both Guest and Cast satisfaction.

Prior to his role in Paris, George served as senior vice president of Resort Operations for the Disneyland Resort, where he played a significant role in the first expansion of the resort – the opening of Disney California Adventure and Downtown Disney. In addition, he was responsible for the daily operations of both theme parks and three hotels, as well as Downtown Disney.

In addition to his leadership roles in both Paris and Anaheim, George served as vice president of Travel Operations at Walt Disney World in Orlando, where he implemented a new Customer Relationship Management (CRM) system that continues to serve as the foundation for how millions of Guests book their travel to Walt Disney World. George also served as vice president of EPCOT, where, in addition to overseeing park operations, he led the Millennium Celebration for The Walt Disney Company.

George graduated from the University of Central Florida with a Bachelors Degree in Sociology.

George’s Disney Tenure – At a Glance