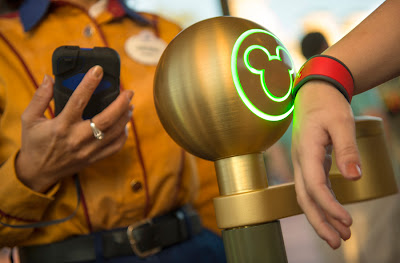 During the next several days Disney will  begin rolling out MyMagic+ RFID enabled single-day and multi-day tickets.

So far, only Disney Resort guests have been issued with RFID enabled tickets, but this is set to change from today as tickets purchased at the parks will be enabled with the RFID chip that will allow guests to use the new 'Touch to Enter' turnstiles. As well as allowing touch entry, the tickets will continue to work with the existing FASTPASS system, and the traditional turnstiles. Along with the easier entry to the parks, another bonus of the new ticket media is that is made of a sturdy plastic, rather than the flimsy paper stock that is currently in use.

If all goes to schedule, all park guest relations locations should be issuing the RFID tickets by February 1,  2013.

There is still no word on when Annual Passholder tickets will be converted to the new media.
Posted by mikeandthemouse at 8:34 PM