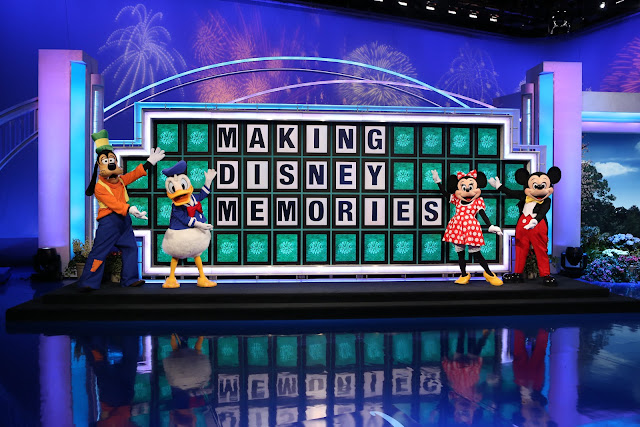 It’s “Disney Time” at Wheel of Fortune as the fun of America’s Favorite Game Show and the magic of Disney come together in the game show’s 30th season for a fully-integrated multi platform collaboration including a week of shows and a sweepstakes for at-home viewers.

During the week of shows, Wheel of Fortune contestants can win “Magical Vacations” to Disney Parks or on Disney Cruise Line. The cars available through the “1⁄2 Car Tag” game element will alternate between Honda and Chevrolet models, sponsors of Disneyland Resort and Walt Disney World Resort, respectively.

The “Wheel of Fortune Making Memories Sweepstakes” encourages viewers to watch “Making Disney Memories Week” on Wheel of Fortune and enter each night’s bonus puzzle solution at www.wheeloffortune.com. Ten winners will each enjoy a vacation for four to the winner’s choice of the Walt Disney World Resort in Florida or the Disneyland Resort in California.

The sweepstakes will live on a co-branded mini-site, accessible via www.wheeloffortune.com that will feature links to various Disney websites as well as photo and video galleries from Vanna’s shoots.

Additionally, Wheel of Fortune will be able to offer its nearly 8 million members of their loyalty program, the Wheel Watchers Club, the chance to find their own “Happily Ever After” with Disney vacation offers.

About Wheel of Fortune:
Wheel of Fortune has been the number one syndicated game show since its inception and has earned six Emmy Awards, including the 2011 Daytime Emmy for Outstanding Game/Audience Participation Show. With more than 30 million viewers per week, syndication’s most successful series continues to attract a larger audience than many primetime television shows. Wheel of Fortune is produced in High Definition by Sony Pictures Television, a Sony Pictures Entertainment Company. It is distributed domestically by CBS Television Distribution and internationally by CBS Studios International, both units of CBS Corp.
Posted by mikeandthemouse at 7:41 PM