Disney has just announced that this week's "Limited Time Magic" will celebrate the Super Bowl with a special pre-parade at the Magic Kingdom (see concept art below). Here is the full info from Disney:

From the Official Disney Parks Blog:
Beginning today, you can see a super pre-parade celebration just ahead of the daily performances of the “Celebrate a Dream Come True” parade at Magic Kingdom Park. It’ll feature Disney football star Goofy and some Central Florida youth football champions. You can also expect to see Walt Disney World Resort cheerleaders and two of the nuttiest referees this side of the 50-yard line and other character favorites.

The pre-parade will run for a limited time – through February 3 – and lead up to a special ticker-tape parade down Main Street, U.S.A., after the big game on February 4. Watch the Disney Parks Blog for more information on that parade.

Also, during this time, check out Cosmic Rays new menu items that commemorate the super Sunday celebration. Special “Soup-er Bowls” representing the teams will be available for one-week only, from February 1 – 9. Savor the Lobster Bisque and Tomato Basil Bisque only available as part of our “Limited Time Magic” celebration. 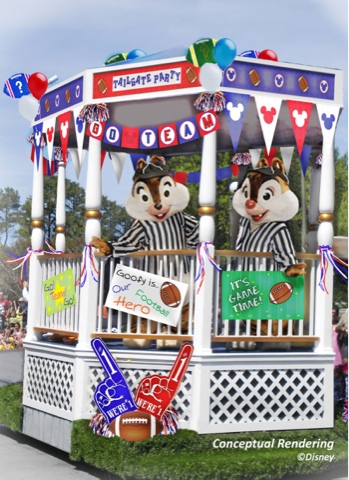 Posted by mikeandthemouse at 2:52 AM