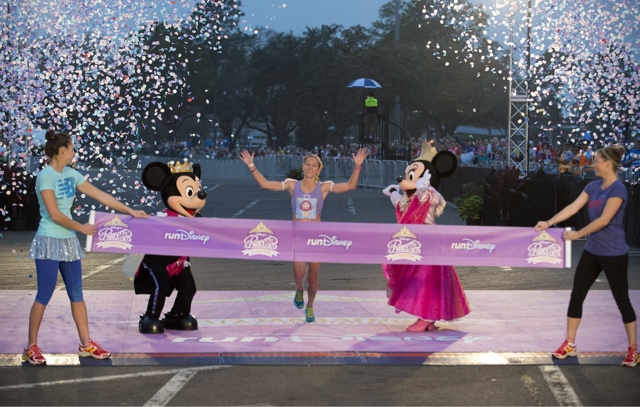 Rachel Booth etched her name in the runDisney record books – again – by winning Disney’s Princess Half Marathon on Sunday for the second straight time, beating her own race record from a year ago.

This latest win, a 13.1-mile journey through Epcot and Magic Kingdom on an unseasonably warm February morning at Walt Disney World Resort, was fairly routine. Booth charged to the front of the pack of 26,000 runners at the start and was never seriously threatened, even though she could hear the cheers for second-place finisher Mia Elbon and third-place finisher Megan Jaswell behind her.

“It never gets old, for sure,” said Booth, who was greeted at the finish line by her husband and two small children. “As I got to Mile 7 and 8 and through Mile 10, I got to see some people (cheering) and that definitely gave me extra incentive.”

In all, more than 36,000 runners – mostly women – competed in various events during the weekend, the largest weekend total in the race’s five-year history. The weekend included the Mickey Mouse and Minnie Mouse Royal Family 5K, Kids’ Races and Disney’s Fit for a Princess Expo in addition to Disney’s Princess Half Marathon. The Expo featured the latest running apparel and equipment, plus a speaker series involving running experts such as runDisney’s official training consultant Jeff Galloway.

Disney’s Princess Half Marathon Weekend is one of seven annual runDisney events and the second women-focused event. The other is the Tinker Bell Half Marathon Weekend, which takes place in January at Disneyland Resort in Anaheim, CA. Both events are designed to celebrate and promote women’s empowerment, women’s health and an active lifestyle. And both are among the nation’s largest race weekends geared towards women.

Posted by mikeandthemouse at 9:13 PM