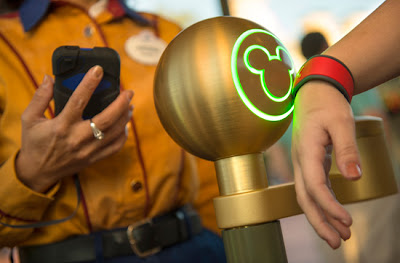 Disney isn't foolish. They are being very proactive in getting some new laws in the Florida books to protect their $1 billion investment.

Read this article written by Jason Garcia of the Orlando Sentinel:

Now Disney wants to make sure those "MagicBands" are protected by Florida law.

The giant resort is lobbying the Florida Legislature this spring to rewrite the state's ticket laws to cover its new bracelets, which Disney hopes will revolutionize the theme-park experience for visitors — and become a lucrative new source of souvenirs.

The company says the changes in state law are necessary as ticketing systems advance far beyond the familiar paper passes, both in its theme parks and elsewhere.

"As technology continues to evolve, theme parks and other venues are able to make ticketing for guests more convenient," Disney spokesman Bryan Malenius said. "The bill being considered by the Legislature will help Florida keep up with the rapidly changing way guests experience entertainment choices, including our parks."

The language is contained in a broader bill that aims to prevent fraudulent sales of theme-park passes, which Disney and others say have become a criminal cottage industry in Florida. But some sports fans and activist groups say the measure goes too far and would unfairly impede consumers from reselling tickets to football games, concerts and other events.

The legislation (HB 1353) would redefine "multi use tickets," a term that includes theme-park passes valid for admission to more than one park or on more than one day. The definition of such tickets would be expanded beyond the conventional printed media to cover any "right designed for admission."

It would make another subtle change as well. Right now, it is illegal to resell or transfer a multi use theme-park pass to someone else after it has been used at least once — but only as long as a phrase such as "nontransferable; must be used by the same person on all days" is printed somewhere on the pass.

The bill would flip that. Instead, it would be illegal to resell any such pass, unless the ticket or venue owner's website clearly say the pass may be used by more than one person.

That change could help Disney in a couple of ways. Printing such warnings will become more cumbersome as the resort moves away from paper passes to wristbands. And unsightly legalese could undermine the aesthetics of the wristbands, which Disney hopes to turn into collectible souvenirs by selling customizable styles and accessories.

Lawmakers have made no secret of their attempts to accommodate Disney's new technology with the legislation. It is testament to Disney's influence in the state Capitol, both as one of the Florida's biggest economic engines and one of its most generous campaign contributors.

"We are codifying that, if Disney wants to use a wristband, a button, an ID card or your phone as a ticket — as they currently do — it's their choice. And, more importantly, it's their right to do so," the bill's sponsor, Rep. Dan Raulerson, R-Plant City, said last week during a presentation to the House Business & Professional Regulation Subcommittee.

Disney and others say the fraud-fighting portions of the bill are just as important.

The legislation would dramatically increase the penalties for people who fraudulently resell tickets to parks and other entertainment venues. The fine for a first-time violation of reselling multi use park passes would jump from no more than $500 now to a maximum of $10,000, and repeat violations would become a felony instead of a misdemeanor.

Capt. Al Rodrigues, who commands the Orange County Sheriff's Office sector that covers Disney World, told lawmakers that a recent investigation turned up a convicted drug dealer who had switched to selling phony theme-park passes to tourists because the existing penalties for the crime are so lax.

"He's making more money than he was in his drug years. He's not facing going to a federal penitentiary — he's not even facing going to state jail. And, frankly, you don't get shot by your opposition when you're selling tickets, the way you do in the drug trade," Rodrigues said.

A spokesman for Universal Orlando said the resort is following the issue but would not comment further.

Disney's provisions appear to have drawn widespread support in the Legislature. But a coalition of consumer and free-market activists is battling hard against other parts of the bill.

One provision would declare that any ticket to an entertainment event is a type of license, rather than personal property, that the issuer could revoke for any reason and at any time.

Another provision would ensure that entertainment venues, event presenters or their agents can employ any ticketing methods they choose, which detractors say could include "restricted tickets" that could not be resold at all or could be resold only through certain outlets.

Critics say that language would ultimately lead to even more market control for Ticketmaster parent Live Nation Entertainment Inc., which is also lobbying for the legislation.

"Consumers want to own the tickets that we buy, and we would like to have choice in the marketplace," said Bill Newton, executive director of the Florida Consumer Action Network.

Written by Jason Garcia of the Orlando Sentinel
Posted by mikeandthemouse at 2:53 PM