Direct from the Disney Parks Blog -

For one day only, Disney’s Hollywood Studios will present a “Limited Time Magic” event for the annual, fan-proclaimed “Star Wars Day,” May 4 – a date that Star Wars fans worldwide turn into a celebratory pun, “May the Fourth Be With You!” 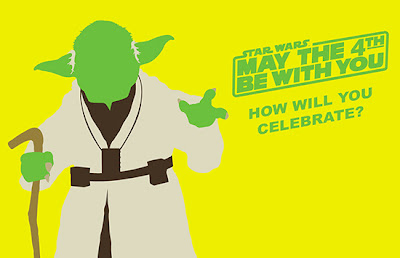 You might even find yourself sitting next to Chewbacca aboard Star Tours – The Adventures Continue. Star Wars characters will make surprise appearances on the 3-D attraction to enjoy the wild journey through space alongside park guests.

A special edition of Jedi Training Academy also is planned that day, with parents invited to join their children (ages 4-12, sign-ups required on first-come basis) on-stage for the training and final showdown with the Empire.

When the sun goes down, galactic fun lights the night as Lobot (from Star Wars: Episode V The Empire Strikes Back) takes over as DJ for a dance party that will be highlighted by a special Star Wars fireworks show.

“May the Fourth Be With You” “Limited Time Magic” park activities and shows are included in regular admission to Disney’s Hollywood Studios.

Join the conversation online by using the hash tag #StarWarsWeekends on Twitter.

Posted by mikeandthemouse at 9:07 AM