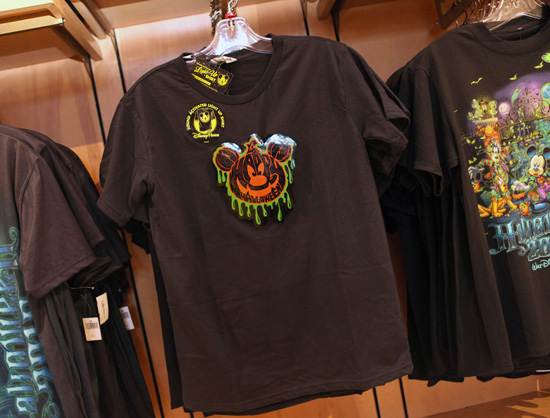 The festive Halloween season has returned to Disney Parks. A few weeks ago, I shared a look at some new and returning Halloween merchandise. Since that article was published, a few additional items have arrived in locations. One item that caught my eye was a new sound activated, light-up shirt I found at the World of Disney in Downtown Disney Marketplace. The pumpkin graphic was from the Halloween style guide, which is a catalog of images that developers and artists can use on merchandise or packaging. The coolest part about this pumpkin graphic is the fact that it reacts to sound. I spoke with softlines developer John Smith about this unique shirt.

“This new Halloween pumpkin is the first in our new light-up shirt designs,” explained John. “As a softlines developer, I like experimenting with new applications or designs for our shirts. We’ve been working on incorporating this technology for a while now. Halloween felt like the right time to debut this shirt. I hope guests will enjoy seeing the pumpkin react to the festive sounds heard during Halloween events at Disney Parks.” 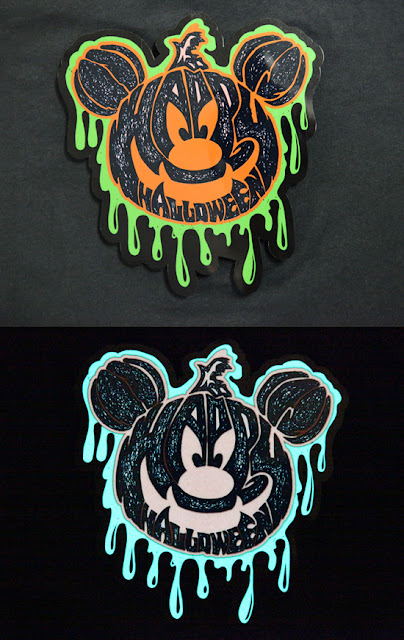 I had fun taking photos of the design at the office. I first shot the pumpkin graphic turned off as seen in the top image above. I then played some music from my mobile phone to capture the image of the illuminated pumpkin in the dark.

The graphic is easy to remove from the shirt as it’s attached by hook and loop fasteners. Once removed, you can see the controller where the primary power switch and sound sensitivity dial are located. Once turned on, there is a secondary power button that is activated by pressing on the front of the design. The controller can be charged using a USB cord, which also comes packaged with the shirt. Finally, instructions on how to use the light-up device are included.

John shared with me four more designs that will debut later this year. Two designs will feature Mickey Mouse with logos for Disneyland and Walt Disney World Resorts. The other two will feature icons from each Disney Resort destination. 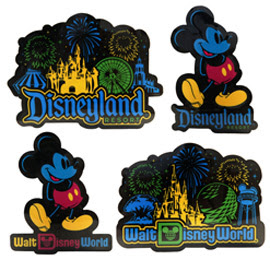 Posted by mikeandthemouse at 9:42 AM