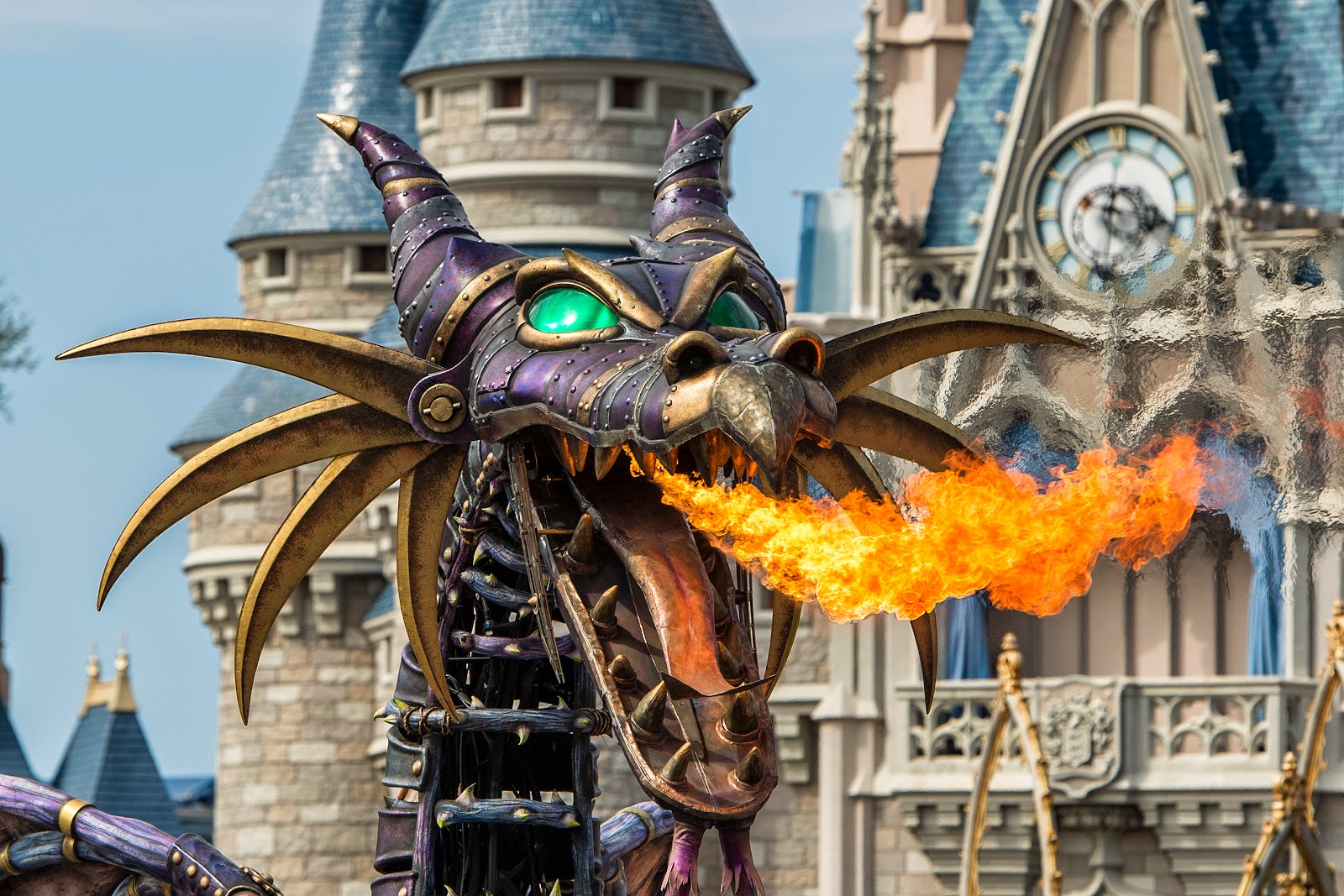 Hold on for the most twisty, turny, rollicking summer ever for Walt Disney World Resort. From the crowning jewel that completes the largest expansion in Magic Kingdom history, a breathtaking new parade that winds its way down Main Street U.S.A., to elevating the guest experience with MyMagic+, guests are rocking their Disney Side in 2014.

Here are the gems guests will find:

Seven Dwarfs Mine Train: The lovable world of Sleepy, Doc, Grumpy, Bashful, Sneezy, Happy and Dopey comes to life in a rollicking, musical ride into the mine “where a million diamonds shine.” Inspired by the Disney animated film classic “Snow White and the Seven Dwarfs,” the family-style coaster will feature first-of-its-kind ride vehicles mounted in cradle-like pivots that allow the vehicles to swing back and forth during the twists and turns of the ride. Adding to the fun, the journey will be accompanied by beloved music from the film classic and riders will be greeted by animated figures of Snow White, the Seven Dwarfs and playful forest critters. Seven Dwarfs Mine Train officially opens to guests on May 28, 2014.

Festival of Fantasy Parade: The Disney Festival of Fantasy Parade brings the magical stories of New Fantasyland to Main Street, U.S.A. through fantastic and innovative parade floats, vibrant costumes and an original soundtrack that features beloved songs from favorite Disney films, plus a new parade theme song. A Steampunk-inspired Dragon as the wicked Maleficent stretches 53 feet in length and 26 feet tall with a prickly spinning wheel dead center of the float. With fiery eyes and glowing effects the spectacular dragon was built on an articulating chassis allowing the float to bend and flex as it moves along the parade route – a first for Disney parades. Ariel and friends grace a larger-than-life music box showcasing a colorful musical party “Under the Sea” while Scottish dancers and a float shaped like an enormous bagpipe announce the arrival of Merida. Other floats celebrate Disney Princesses; Peter Pan and Wendy soar above a pirate galleon; Rapunzel and Flynn Rider appear on a longship in search of another “Best Day. Ever.”

Princess Fairytale Hall: Also part of the Magic Kingdom expansion, the fantasy world of Disney royalty becomes reality in the Princess Fairytale Hall, where guests get to live out their dream of meeting a real Disney princess. It’s the enchanting new home to Anna and Elsa, who join Cinderella and Rapunzel each day until the early evening, after which other visiting Disney Princesses will be available to greet guests. Surrounded by lush purple and gold trimmings, stone walls and ornate chandeliers, loyal subjects can choose between two queues: one for Cinderella and Rapunzel, or one for the Frozen sisters and visiting princesses.

MyMagic+: MyMagic+ is a fantastic new way to experience even more of the magic of a Walt Disney World vacation. Guests are able to design the Disney World vacation they want – customizing everything from their at-home planning to their in-park experiences to capturing memories to share and relive. Guests have the confidence of locking in their “must-do” experiences while having the flexibility to make updates on the go thanks to the My Disney Experience app. MyMagic+ takes renowned Disney guest service to a new level – more seamless and aimed at delivering the best Disney World experience ever.

Rock Your Disney Side: 24 Hours: Guests are invited to show their “Disney Side” by dressing as their favorite Disney hero or villain in the latest all-night extravaganza. The Magic Kingdom Park in Florida and Disneyland Park and Disney California Adventure Park in California will mark the beginning of summer fun with a bi-coastal celebration from 6 a.m., May 23 to 6 a.m., May 24, 2014, local time. It will feature a cavalcade of events showcasing the good-vs.-evil of classic Disney stories including character meet-and-greets throughout the parks, special entertainment, event merchandise, and food and beverage offerings. Along with the entertainment guests have grown to love every day, they’ll discover surprise additions and special events throughout the 24 hours.

New Nighttime Experiences at Epcot: While enjoying the nightly fireworks spectacular, guests sample decadent desserts from around the world paired with the perfect international sparkling wines in an intimate and exclusive environment during the IllumiNations Sparkling Dessert Party. After IllumiNations, guests can sample, sip and stay awhile longer with the Epcot After Hours Wind Down. Award-winning Epcot chefs and sommeliers pair a beverage flight with cultural cuisine; guests can choose from four locations. For reservations to both of these experiences: www.Disneyworld.com/spring.

Disney Fit Challenge: Disney Sports teams up with I Am CrossFit for an inaugural event at ESPN Wide World of Sports Complex that will test athletes’ speed, strength, endurance, balance and power. During the three-day competitive fitness event September 26-28, recreational, intermediate and elite competitors will face challenges such as muscle-ups, double-box jumps, kettle bell swings, push-ups, squats and broad jumps based on age and skill level.

Disney Springs: Downtown Disney in 2014 continues its multi-year transformation into Disney Springs, a unique and vibrant shopping/dining/entertainment destination to be set amid beautiful open-air promenades, meandering springs and waterfront charm. Anchored by a signature water tower and grand entry, Disney Springs will boast four interconnected outdoor neighborhoods and be home to everything from shopping boutiques to flagship stores to great new restaurants and entertainment venues. The excitement has already begun! Newly opened in Downtown Disney West Side: Fit2Run serving both recreational runners and athletes. In 2014, Starbucks adds two locations: a storefront at Downtown Disney West Side and a kiosk near World of Disney at Downtown Disney Marketplace. Also in 2014: new retail — from women’s accessories to electronics, sportswear to girl’s fashions, home design accents to salon products — will open as the Marketplace Co Op (replacing Team Disney). With a planned completion in 2016, Disney Springs expects to double the number of venues, to more than 150.

Disney Cruise Line: In 2014, Disney Cruise Line will offer new itineraries, including an expanded collection of European cruises highlighting the Greek Isles. Plus, DCL will depart for the first time from homeports in Venice, Italy and San Juan, Puerto Rico. From May to August, the re-imagined Disney Magic returns to the Mediterranean, offering a rich array of itineraries, cruise lengths and ports of call. New for the season, the Magic will homeport in Venice and will call on the Greek Isles and Sicily for the very first time. In fall 2014, Disney Magic will sail out of San Juan for four Southern Caribbean cruises. Disney’s first cruise ship now boasts all-new experiences and re-imagined spaces including AquaDunk, a body slide dropping three decks, and Marvel’s Avengers Academy transporting kids 3-12 into magical worlds of brave superheroes. In summer 2014, the Disney Wonder will sail seven-night cruises from Vancouver to Alaska; a special nine-nighter calls at Sitka, Alaska – a first for DCL.

Spice Road Table: Epcot guests can treat themselves to an exciting addition to the Morocco pavilion. Inspired by the whitewashed, outdoor cafes found along the Mediterranean, Spice Road Table offers a variety of Moroccan small plates and specialty drinks – along with scenic views of World Showcase Lagoon. A collection of shops arranged “souk”-style stretches along the front of the building. The space is finished in cozy booths, Moroccan light fixtures, tapestries and art representing Morocco’s indigenous Beber tribes.

California Grill reopening: With sweeping views of Walt Disney World Resort from the 15th floor of Disney’s Contemporary Resort, California Grill marks its first summer  following a major makeover that redefines Disney’s culinary scene. The spacious dining room is transformed with a modern style that captures the spirit of California throughout the design scheme. Cuisine, too, has been reimagined with seasonal ingredients and a lighter touch, such as baked local prawns with charred lemon and wild Columbia River salmon with Zellwood sweet corn pudding. And the sushi bar expands featuring pristine seafood. Posted by mikeandthemouse at 9:07 AM