It was just announced that Chef Masaharu Morimoto, who many of you know from his appearances on Iron Chef America, is opening a one-of-a-kind dining experience in the heart of Disney Springs at the Walt Disney World Resort. 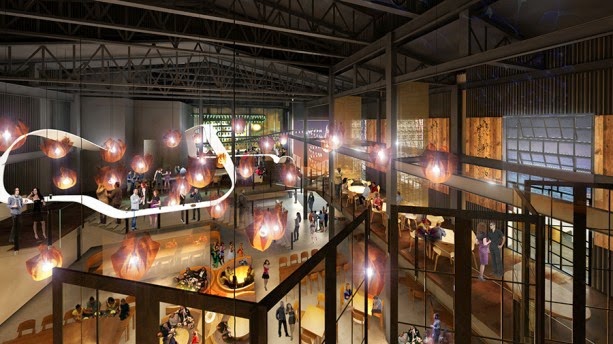 Morimoto Asia will be the Japanese master chef’s first-ever pan-Asian restaurant featuring flavors from across the continent. This Disney Springs dining destination will include unique exhibition kitchens showcasing traditions like Peking duck carving, and dim sum.

“I’m very excited to bring this new concept to Disney, something I’ve always dreamed of,” said Chef Morimoto. “It’s a wonderful chance to share some of my favorite foods from across the Asian continent.”

The two-story restaurant is scheduled to open in the Summer 2015 at The Landing (formerly Pleasure Island) in Disney Springs. Morimoto Asia will feature waterside seating, terraces, a grand hall and a cocktail lounge.

Also today, another new concept dining experience, The BOATHOUSE, was announced for The Landing in Disney Springs.

The BOATHOUSE will be an upscale, waterfront dining experience that’ll immerse guests both on land and on water with live music, guided tours aboard the Captain’s piloted 40-foot Italian Water Taxi with champagne and chocolate-covered strawberries and guided Amphicar rides that launch from land, enter the water, and take guests on a 20-minute tour of the landmarks of Disney Springs.

“We are very excited that the BOATHOUSE is joining the Walt Disney World family at Disney Springs,” says creator Steven Schussler. “Walt Disney Imagineering has created a wonderful, interactive, culinary and entertainment experience at Disney Springs. We are proud to be part of this magical experience.” 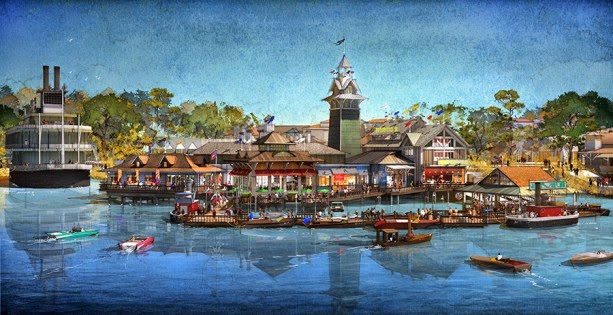 The BOATHOUSE will open in the Spring of 2015 in Disney Springs. The restaurant’s gourmet menu (served daily until 2 a.m.) will feature steaks, chops, seafood and a raw bar. The BOATHOUSE is the latest project of Schussler Creative, the creators of Rainforest Cafe, T-Rex and Yak & Yeti at the Walt Disney World Resort.

About Masaharu Morimoto
Perhaps most recognizable as the star of Iron Chef and Iron Chef America, Chef Masaharu Morimoto has created a bridge between the culinary traditions of his native Japan and the American palate, bringing intense excitement, exquisite technique, and perfectly balanced flavors to thousands of diners throughout the world. He has garnered critical and popular acclaim for his seamless integration of Western and Japanese ingredients and has effectively created a signature style that positions him as one of today’s foremost chefs.  In 2001, Morimoto opened his first eponymous restaurant in Philadelphia, which was followed by Wasabi by Morimoto in Mumbai in 2004 and another in New Delhi in 2008. Today, Chef Morimoto has expanded his culinary empire across the globe, with restaurants in Mexico City, New York City, Boca Raton, Maui, Chicago, South Beach, Waikiki and Napa. Morimoto’s restaurants have received numerous accolades throughout the years, including Morimoto Napa which was named one of Food & Wine Magazine’s “Best U.S. Restaurant Openings” in 2010, and Morimoto New York which won the James Beard Award for “Outstanding Restaurant Design” in 2008, as well as a “2006 Hot List Restaurant” by Conde Nast Traveler, one of New York’s “Top 50 Restaurants” by Travel + Leisure, and one of New York Magazine’s “Best New Restaurants.”

About Disney Springs
Representing the largest expansion in Downtown Disney history, Disney Springs will be a one-of-a-kind Disney experience, treating guests by day and night to great dining, shopping and entertainment amid beautiful open-air promenades, flowing springs and waterfront charm. With an air of sophisticated grace and design that harkens to Florida’s waterfront towns at the turn-of-the-century, Disney Springs will be home to four distinct, outdoor neighborhoods opening in phases: The Landing, Town Center, Marketplace and West Side. The Landing, as the first of the four neighborhoods and home to unique and memorable dining experiences including Morimoto Asia, is scheduled to open in spring 2015.

When fully completed in 2016, Disney Springs will double the number of shopping, dining and entertainment venues – from the current 70 to approximately 150.

Renderings are property of the Walt Disney World Resort
Posted by mikeandthemouse at 8:20 PM