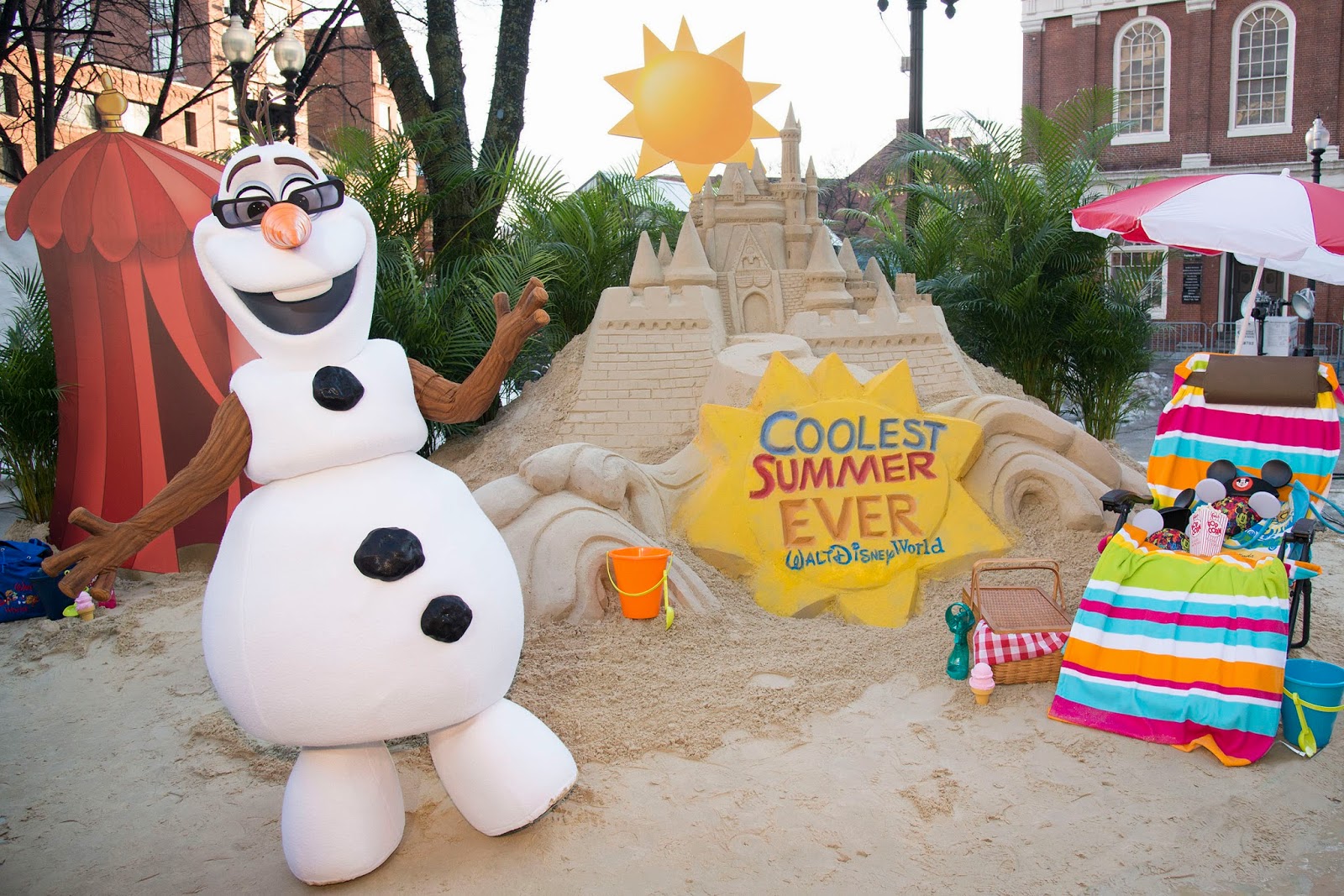 Walt Disney World Resort will kick off the “Coolest Summer Ever” with 24 hours of nonstop fun during a special event May 22-23 at the Magic Kingdom, hosted by Olaf, the summer-loving snowman from Disney’s blockbuster animated hit “Frozen.”

To announce the 24-hour event and the cool summer season, Disney today brought to life a warm summer scene inspired by Olaf’s dream, creating a 20-foot-wide beach complete with a Cinderella Castle made of sand in the middle of winter-weary Boston.

Surprised pedestrians near historic Faneuil Hall were greeted by Olaf and joined by playful beach-goers in summer attire with beach chairs and beach balls – all reminders of an exciting season of fun ahead at Walt Disney World Resort and a welcome relief from the city’s near-record snowfall approaching nine feet.

Memorial Day weekend is the traditional start of family vacation time, and Walt Disney World Resort will launch into the season full force. The Magic Kingdom will be open 24 hours to guests from 6 a.m. to 6 a.m., Friday May 22 to Saturday, May 23*. Guests will be invited to come in costume** to show their Disney Side while a selection of favorite attractions, entertainment, special event merchandise, plus food and beverage are on tap all night long to celebrate the start of the “Coolest Summer Ever” at Walt Disney World Resort.

The around-the-clock celebration features Disney character greetings, dance parties and surprises into the wee hours of the night.

During the “Coolest Summer Ever,” with Olaf as the official host, Walt Disney World guests can get their cool on all summer long at four theme parks and two water parks.

The all-day/all-night revelry of the 24-hour party will include dancing and special character encounters at locations in Disneyland and Disney California Adventure parks, along with enchanting Diamond décor throughout the resort and the exciting shows and attractions that bring guests back year after year. The Disneyland Resort invites guests of all ages to kick off the summer travel season in Southern California, celebrating 60 years of magic at a resort that remains forever young.

*Hours of operation: 6 a.m. on 5/22/15 to 6 a.m. on 5/23/15, subject to capacity restrictions. Only select attractions, entertainment and services will be available. Valid theme park admission required. Subject to restrictions and change without notice.

**Disney characters will be in the parks throughout the day and all night, inviting guests to dress up for the occasion, too. Guests may join the party dressed in costume. Costumes should be child-friendly and adhere to any guidelines determined by Disney.
Posted by mikeandthemouse at 11:39 AM