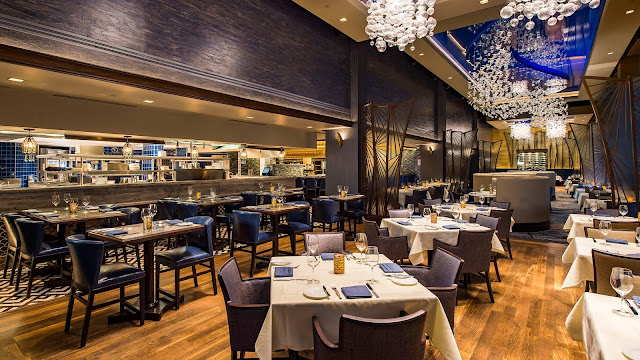 With hues that conjure up the deep blue sea, the re-imagined Flying Fish restaurant beckons guests to Disney’s BoardWalk with a contemporary, sophisticated interior that pays homage to the golden era of seaside boardwalk dining.

A clear-glass school of artful fish and bubbles is suspended from the stretched-fabric ceiling, adding a lightness to the dining room. White linens, wood, tiled walls and deep-blue carpet add a richness to the space that features an open kitchen and 191 seats. An elegant private dining area room at the back of the restaurant showcases part of the extensive wine collection. 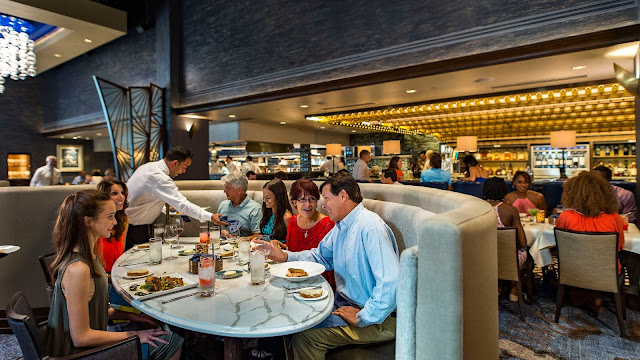 The popular “Chef’s Counter” is redesigned, now with seating for 12 at three separate tables directly in front of the open kitchen, where a six-course dinner with its own menu is offered, said Chef Tim Majoras.

Majoras, who was has been on the Flying Fish team since 2011, is at the helm in the kitchen, where sustainable fish is the star of the new menu. Starters include Blue Crab Bisque with jumbo lump crab, melted leeks, aged sherry and tarragon crème fraîche; corn-crusted wild Gulf shrimp, and Tour of the Coast with local middleneck clams, rock shrimp, icy blue mussels and Florida coast grouper cheek. Along with sustainable fish, entrées include planch-seared Hokkaido scallops; Wagyu filet mignon; Maine lobster Nero Pasta with golden tomato sauce, young artichokes and micro-lemongrass; Wild Alaskan King salmon; bison striploin, and a wood-fired Spanish octopus and Chilean sea bass combo.

New high-tech wine technology allows more special wines by the ounce, according to Stig Jacobsen, general manager and sommelier at Flying Fish. The restaurant has more storage capacity, with nearly 300 labels, and almost 80 by the glass. The popular wine flights are back, as well as an all-new cocktail menu.

Next door, the new AbracadaBar “curious cocktail lounge” combines the Golden Age of Magic with the magic of Disney storytelling, with whimsy in the design from the Walt Disney Imagineering (WDI) team that creates stories in true Disney fashion. 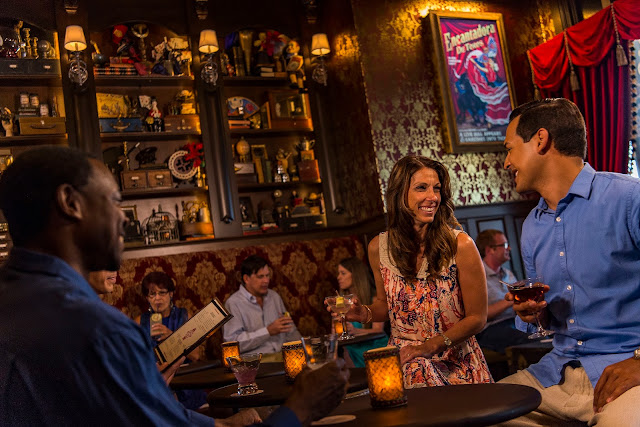 According to WDI, the lounge was once a secret stomping ground for famous touring magicians, local boardwalk illusionists and the loveliest magician’s assistants of the day. After every magic show, these prestidigitators would gather at the bar, where they’d conjure up new cocktails, swap magic tips and tricks, and often stay up all night attempting to “out-charm” each other with their extraordinary illusions.

Look for cocktails such as “The Conjurita,” with Gran Centenario Plata Tequila, Cointreau, simple syrups and lime juice; the “Parlor Trick” with Four Roses Small Batch Bourbon, simple syrups and a splash of soda water, and “Pepper’s Ghost” with Cîroc Pineapple Vodka and habanero lime. 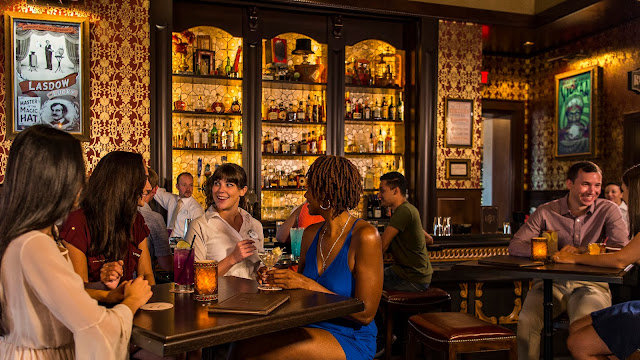 And, the story continues, it was on just such an evening that every single magician in the lounge vanished into thin air, never seen again. And after sitting vacant for nearly 70 years, the secret magician’s lounge is now back in the spotlight.

While it’s rumored that the magicians who frequented the lounge vanished without a trace decades ago, their magic still remains strongly intact, and can be seen, heard, and even savored in the bar’s signature cocktails. From its enchanted magic show posters and mystifying mirrors to vintage props and tricks left behind years ago, AbracadaBar is true immersion in Disney storytelling.

Posted by mikeandthemouse at 3:13 PM