2017 NFL Pro Bowl to Feature Events at Disney, Throughout Orlando During Weeklong Celebration 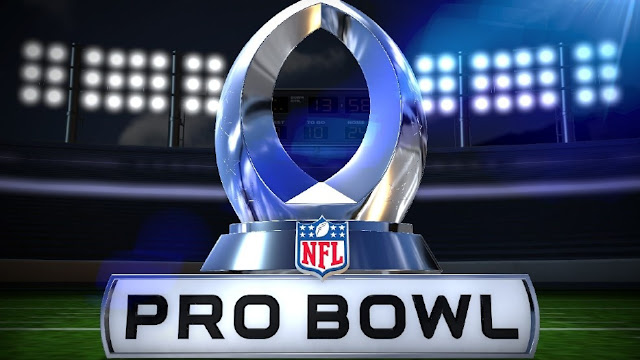 The 2017 Pro Bowl presented by Aquafina in Orlando, Fla. is much more than a game on Sunday; it’s a week-long celebration that unites and inspires the entire football community. In the week leading up to the game, the NFL will host events that will bring interactive fan experiences, youth and high school football competitions and a spirit of community to Orlando.


The week-long celebration will culminate with the Pro Bowl game featuring 88 of the NFL’s best players on Sunday, Jan. 29 at Camping World Stadium that will air on ESPN and ESPN Deportes at 8 p.m. ET.

Visit NFL.com/ProBowl and follow @NFL on Twitter for the most up-to-date Pro Bowl information. Fans may virtually participate in Pro Bowl Week by tagging their tweets with #ProBowl.

Below are ways the NFL will celebrate the football community, provide fans access to a range of free football activities:

NFL Pro Bowl Experience will be open to fans Wednesday, Jan. 25 – Thursday, Jan. 26 from 10:00 a.m. to 6:00 p.m. and Friday, Jan. 27 – Saturday, Jan. 28 from 10:00 a.m. to 7:00 p.m. at ESPN Wide World of Sports at Walt Disney World Resort. The free-admission, family-friendly football fan festival will bring fans closer to the NFL through interactive games and sponsor activations.

An assortment of free fan activities at the 2017 NFL Pro Bowl Experience are detailed below. A full list of the attractions is available at NFL.com/ProBowl. No tickets are required.

The AFC and NFC teams will practice at ESPN Wide World of Sports from Wednesday, Jan. 25 through Saturday, Jan. 28. All media availabilities will take place on the field at the conclusion of each practice.

Practices are free and open to the public, but fans can pre-register for priority access and opportunities for VIP seating upgrades here. Fans are encouraged to arrive early as space is limited.

The 2017 Women’s World Football Games will take place Wednesday, Jan. 25 to Saturday, Jan. 28 at ESPN Wide World of Sports. The fourth-annual event will bring together more than 250 female tackle football players from around the world for five days of training, skills sessions and 11v11 competitions. Participants will also be eligible to participate in the NFL’s Women’s Careers in Football Forum at ESPN Wide World of Sports Jan. 26-27.

*Note: All practices and games are open to the media. Practice and games to be played at ESPN Wide World of Sports on Field 29, with the exception of Game #2, which will be played on Field 17.

The NFL will host the first-ever Women’s Careers in Football Forum Thursday, Jan. 26 and Friday, Jan. 27 in conjunction with USA Football’s 2017 Women’s World Football Games at ESPN Wide World of Sports. The forum is open to all Women’s World Football Games participants and will feature panel discussions, presentations and networking sessions aimed to educate and prepare women for positions in football operations, including coaching, officiating and scouting.

The Women’s Careers in Football Forum furthers the NFL’s commitment to diversity and inclusion. All attendees will be entered into the league’s Diverse Talent Community, an online recruitment platform that encourages quality, dynamic candidates with diverse backgrounds to join its ranks through a shared talent acquisition database for Human Resources across the NFL and its 32 clubs.

On Thursday, January 26 from 11:30 a.m.– 12:30 p.m. and 1 – 2 p.m., the NFL will host two PLAY 60 clinics with current NFL players and local students from Fuel Up to Play 60 schools. In addition, the Jacksonville Jaguars and the Tampa Bay Buccaneers will host community groups from their region at the PLAY 60 clinics, which will take place ESPN Wide World of Sports.

PLAY 60 is the NFL’s campaign to promote youth health and wellness, aimed at encouraging kids to get active for 60 minutes a day. For more information, visit NFLRUSH.com/PLAY60.

Organizations and schools taking part in the clinics include:

The Pro Bowl Skills Showdown, pitting AFC and NFC All-Stars against each other in unique competitions, will air on Thursday, January 26 at 7:00 p.m. ET on ESPN. Each team in the Skills Showdown will feature a mix of quarterbacks, running backs, wide receivers, tight ends, linemen, linebackers and defensive backs. The 2017 Pro Bowl Legends Captains, Jerome Bettis and Ray Lewis of the AFC and Tony Gonzalez and Charles Woodson of the NFC, will lead their respective squads.

Taking place at ESPN Wide World of Sports at the Walt Disney World Resort in Lake Buena Vista, Fla., the competition will include:

A limited number of free tickets to the Skills Showdown taping will be made available to fans. Fan may register for tickets here.

From Thursday, Jan. 26 to Saturday, Jan. 28, EA SPORTS will host The Madden Bowl Group Stage tournament at ESPN Wide World of Sports. The Madden Bowl, the second EA Major Series event of the $1 Million Madden NFL 17 Championship Series, will bring together the top 16 players from across the country to compete during Pro Bowl Week in Orlando, FL. These elite competitive players advanced through a grueling online elimination process featuring millions of Madden players in pursuit of the Madden Bowl title and their share of $250,000.

For the 2017 Pro Bowl, players will be saying “Thank You, Coach” to that special high school coach who most impacted their life and NFL career. Each Pro Bowl player attending may invite their high school coach and a guest to celebrate Pro Bowl Week in Orlando.

Sixty-four teams from across the country – eight regional champions in four divisions plus 32 at-large teams – will compete and each will represent a different NFL club. Divisions include 9-10 coed, 11-12 coed, 13-14 boys and 13-14 girls. NFL Pro Bowl players and Legends will serve as guest coaches, encouraging the teams as they compete for the national title. The 13-14 Boys Championship Game will be aired on ESPN on Sunday, Jan. 29 as part of the network’s broadcast of the Pro Bowl at Camping World Stadium.

As part of the weeklong celebration in Orlando, current Pro Bowl players will take part in a special Pro Bowl parade at Disney’s Magic Kingdom® Park on Friday, Jan. 27 at 2:30 p.m. The four Pro Bowl team captains will be joined by Mickey and his pals, as well as kids and families from Make-A-Wish Central and Northern Florida and the Tragedy Assistance Program for Survivors (TAPS), in the celebratory parade down Main Street U.S.A.

The Pro Bowl parade continues a tradition at Disney Parks of honoring extraordinary sports champions from professional football, basketball, hockey, baseball and beyond. The parade will be livestreamed on the Disney Parks Blog. Fans may also follow along on Twitter with the hashtag #DisneyParksLIVE.

On Friday Jan. 27, the NFL will host a series of football development panels for NFL FLAG Championship and Punt, Pass, and Kick participants and their parents at ESPN Wide World of Sports. AFC Pro Bowl Legend Captain Ray Lewis will kick off the day’s competition with a motivational speech for participants. Two afternoon panel sessions at 1:00 p.m. and 3:30 p.m. will address the values of football and sportsmanship and feature NFL Pro Bowl players and Don Shula NFL High School Coach of the Year Award nominees.

Members of the NFL FLAG Championship teams will experience what it feels like to be in the spotlight like an NFL player at Youth “Media Night” on Friday, Jan. 27 at 7 p.m. at ESPN Wide World of Sports. At the event, FLAG participants will take part in interviews with current Pro Bowl players and NFL Legends. In addition to being interviewed like the stars, NFL FLAG and PPK participants will enjoy food and entertainment, photo opportunities with NFL players and Legends and walk a red carpet like the NFL’s best.

The NFL is teaming with Walt Disney World Resort to host the Pro Bowl 5K Run at Epcot on Saturday, Jan. 28 at 7:00 a.m. Participants will receive a Pro Bowl 5K Run race bib and finisher medal. Fans ages five and up may register for the run here.

The Pro Bowl 5K Run benefits Make-A-Wish Central and Northern Florida, an organization dedicated to granting the wishes of children with life-threatening medical conditions. With the support of volunteers, the Pro Bowl 5K Run will give hope, strength, and joy to a sick child by granting his or her most heartfelt wish.

On Saturday, January 27, the NFL will host approximately 100 local high school football players for a day-long event designed to encourage team-building and unity and to educate players about character development and healthy relationships. The program will feature a character development session with A CALL TO MEN CEO Tony Porter in which students will identify signs of healthy and unhealthy relationships and discuss effective strategies for violence prevention. As part of the event, players will also attend Pro Bowl practice and visit the NFL Pro Bowl Experience, a free, football-themed fan festival.

The North American Championship features top high school-aged national football teams from the United States and Canada. On Saturday, Jan. 28, each country’s Under-18 National Teams will play at 5:30 p.m., followed by a matchup of each nation’s Under-19 National Teams at 8:30 p.m. Both games will be played at ESPN’s Wide World of Sports Complex.

The 2017 Pro Bowl will be played on Sunday, Jan. 29 and simulcast live on ESPN and ESPN Deportes at 8:00 p.m. ET from Camping World Stadium in Orlando.

Tickets to the 2017 Pro Bowl are on sale through NFL.com/ProBowlOnSale.

Pro Football Hall of Fame running back Jereome Bettis, All-Pro tight end Tony Gonzalez, two-time NFL Defensive Player of the Year and Super Bowl XXXV MVP Ray Lewis, and former NFL Defensive Player of the Year and All-Pro defensive back Charles Woodson will serve as 2017 Pro Bowl Legends Captains. Bettis (offense) and Lewis (defense) will lead the AFC, while Gonzalez (offense) and Woodson (defense) will lead the NFC. The NFL legends on both teams will also be assisted by two active player captains, who will be determined by a player vote on Wednesday, Jan. 25.

The 2017 Pro Bowl coaching staffs will be from the losing teams in the AFC and NFC Divisional playoffs with the best regular-season records.

Live audio coverage of the Pro Bowl will be available on Westwood One, SiriusXM NFL Radio and on the TuneIn app. NFL Mobile from Verizon will stream the NFL Pro Bowl live via mobile devices for Verizon users, as well as offering full coverage of stats, videos, news stories & more for all. After it’s over, replay the game with NFL Game Pass. The 2017 Pro Bowl will feature a return to the traditional AFC vs. NFC format following three years using a revised, “unconferenced” structure.


NFL Network is providing Pro Bowl coverage in its news and information programming throughout the week leading up to the big game. Good Morning Football, Up to the Minute and NFL Total Access will offer updates as well as on-site reporters in Orlando. Live play-by-play, highlights and in-game stats for the Pro Bowl are available through the game center experience on NFL.com and NFL Mobile, including behind-the-scenes coverage from practice throughout the week.

Posted by mikeandthemouse at 12:56 PM