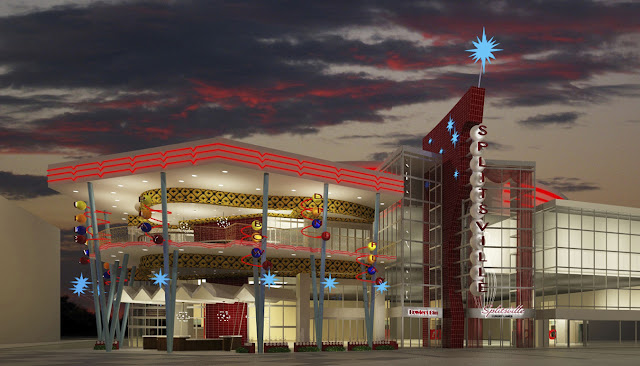 With two kitchens, dramatic architecture, outdoor seating and live entertainment, guests can bowl and snack on pizza or filet mignon sliders, or skip the lanes and make a reservation for full-service dining – indoors or outdoors on the patio.

There’s sushi constantly being rolled on display upstairs and downstairs. “Who would expect sushi with bowling,” says Mark Gibson, co-founder of Splitsville.  Experts are slicing and dicing everything from California rolls to spicy tuna and the JB Roll with salmon – a dozen rolls in all.

Booths and tables for diners have blue, silver and gold accents. “They’re classic and refined, but with fun touches and retro finishes,” says Gibson.

The sophisticated menu, which features items for the entire family, is the creation of Chef Tim Cushman, one of Food & Wine magazine’s “Best New Chefs” in 2008. Starters include three-pepper calamari sautéed with cherry, jalapeño and banana peppers; seared ahi tuna; alley nachos with the works; mini-turkey clubs made with freshly roasted turkey and Loaded Fries “smothered with nacho cheese, bacon and love.”  Plus there are healthier options such as a variety of salads and edamame.

Burgers are a blend of Black Angus brisket, short ribs and ground beef, including a triple-decker Mad King burger, a full pound with double cheese and bacon, topped with a crispy onion ring.  But it’s not all sandwiches and salads.  Standout entrées include slow-cooked pulled pork with fries and slaw; blackened mahi mahi with grilled shrimp and spicy, buttery voodoo sauce; an 8-ounce filet mignon; and steak chimichurri.  There are seven kinds of pizzas, from cheese to barbecued chicken to the Fire House which comes with mozzarella, diced chicken tenders, spicy bleu cheese sauce and a drizzle of Ranch dressing.

Desserts to share with family and friends include sundaes, brownie a la mode and a Red Velvet Cake (also known as “Giant Cake”).

The kids’ menu includes burgers, chicken tenders, mac and cheese or grilled cheese, all for $7.

To go with Splitsville’s appetizing cuisine is a wide selection of beverages. There are five bars throughout Splitsville, including two on the patios upstairs and downstairs, offering everything from old-fashioned slushies to an 18-ounce frozen schooner of draft beer.  Signature cocktails include rum runners and piña coladas, snickertinis and key lime martinis. A wine list offers more than 25 labels, mostly Californian. And the new “freestyle” Coca-Cola machine, which is available with the purchase of a special commemorative cup, is a hit with all ages, with more than 100 flavor combinations.

Separate menus are available for private events for up to 750 guests and the venue is open from 10 a.m. until 2 a.m.

“It’s all about having fun together,” says Gibson. “And we think Splitsville is the perfect combination with a classic sport, good eats and high energy.”
Posted by mikeandthemouse at 5:59 PM